Author Amie Louellen recently released her debut novel, Brodie’s Bride, via The Wild Rose Press, a delightful contemporary romantic comedy. She joins us today to tell us a little about it. Welcome, Amie. 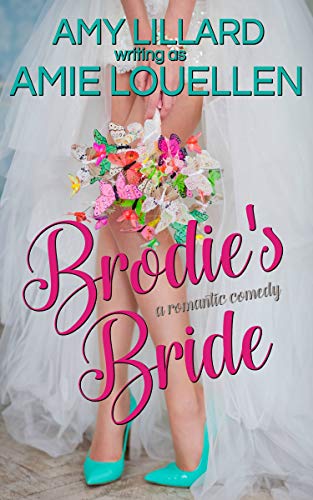 Waking up next to a beautiful golden-haired stranger isn’t the worst thing that has ever happened to Brodie Harper, but staying in a fake marriage in order to gain a new construction contract could very well be.

Savanna Morgan just wanted a way out of an engagement to a man she didn’t love. Marrying Brodie seemed liked the perfect answer at the time. Less perfect the next morning when she finds herself disowned by her father and flat broke. Now she must make it through the weekend. Monday they can get it all annulled and forget it ever happened.

The real problem may be keeping their hands off each other until then.

Excerpt—
“On Monday, after our appointment, you’re leaving.”
“I have to go home,” she said quietly, turning away from him to stare into the postage-stamp sized back yard.
“But we have an agreement for the weekend. I think we should have some ground rules.”
“Good idea.” Savanna clapped her hands, then rubbed them together as if she were ready to get down to business. “Like what?”
“We only have two working bedrooms here,” Brodie said. “Mine and Nan’s. Do you mind sharing a room with me?”
Her pupils dilated, and he knew she was thinking about the scarlet room they had shared last night.
“My room has two beds,” he continued. “We can be like Lucy and Ricky.”
She smiled. “If it was good enough for the Ricardos, I’m sure I can handle it for a few days.”
“We may not so lucky at the Sullivan’s.”
Sobering, she nodded. “If there’s only one bed there, we can just take turns sleeping in it.”
“Fair enough.” Brodie said. “Now, as a married couple—especially at the ranch—we’ll be expected to act like a married couple.”
“Okay. But only around others. When we’re alone, we can act like we’re not married.”
“Correct. But sometimes…” He took a step closer to where she leaned against the porch railing. “Sometimes married people hold hands.”
He reached out and took her fingers into his own. Her skin was velvet soft and smelled so sweet, like the mountains after a rain.
“I—I don’t have a problem with that.”
“Sometimes married couples put their arms around each other.” He placed her hands behind his neck, then slid his arms around her waist.
“That’s okay,” she whispered. He watched as she swallowed hard.
“And sometimes married people kiss. Just a peck here and a peck there. Are you going to have a problem with that?”
“Huh-uh.” She shook her head.
“Maybe we should practice,” he rasped, bending his head close to hers.
“Maybe,” she repeated before he brushed his lips across hers once, then twice.
His intent had been the small, nearly chaste kiss of old married couple, but once he got close to Savanna, once he could smell her sweetness and taste her heady essence, he couldn’t stop himself.
He pulled her close to him, gathering handfuls of her tank top, securing her to him. Over and over he slanted his mouth across hers. Over and over, deeper and deeper, until her whimper brought him back.
He released her, his breath rasping in and out of his lungs in hard painful gasps.
She grasped the edge of the porch railing, looking as disturbed as he felt.
With demonstrations like that, they may not ever convince Blair and Nan their marriage was an accidental twist of fate, but they would surely convince Red Sullivan their passion was for real.
Brodie ran his fingers through his hair, just one more gesture to keep from reaching for Savanna again.
“There,” he managed to croak. “That wasn’t so bad, now was it?”

Available at Amazon for the Kindle, and barnesandnoble.com for the Nook.

Wow! Is it hot in here, or just me? 😉 Thanks for sharing that with us, Amie!

Thanks again for stopping by, Amie, and good luck with Brodie’s Bride!

To learn more about Amie Louellen, see her blog at: http://amielouellen.wordpress.com/

(Legalese silliness: My apologies to my Canadian friends but contests only open to US residents, and void where prohibited by law.

No extra entries necessary other than, of course, to leave a comment on the appropriate contest entry for that time period.