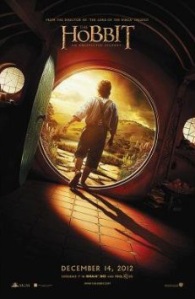 Peter Jackson’s latest installment in the Lord of the Rings movie franchise goes back to the beginning of J.R.R. Tolkien’s epic saga. With the story of The Hobbit: An Unexpected Journey, we learn Frodo’s uncle, Bilbo’s history. The movie (and the story) start out with a party, but—Jackson diverged a little from the text and started as he began The Fellowship of the Ring, with Bilbo’s 111 birthday party.

Bilbo spent, so says the opening of The Hobbit: An Unexpected Journey, the morning of the party beginning the famous book that we read in Tolkien’s classic novel The Hobbit.

Okay, that’s enough to irk certain fans I know, but after that the fun begins as we jump into Bilbo’s point of view (played by Martin Freeman) and back many decades to Gandalf (played again by the great Sir Ian McKellan) arriving on his doorstep and asking if he wishes to be part of a Grand Adventure.

But— “We have no use for adventures. Nasty disturbing uncomfortable things! Make you late for dinner!” says Bilbo.

Dismissed, but not deterred, Gandalf leaves a calling card, and Bilbo soon finds his home invaded by a pack of dwarves (Dwalin, Balin, Nori, Ori, Dori, Bifur, Bofur, Bombur and etc) and their king. Thorin Oakenshield (played by Richard Armitage), who inform him they wish him to join them on their quest to reclaim Lonely Mountain. Oh, yes, the reason they aren’t in possession of said-mountain? That’s just a trifle. A dragon ousted them, you see.

So you know the story, off they go. The narrative is broken up by other points of view showing something strange going on around Middle Earth. The wizard, Ratagast the Brown finds his forest dying (and a possible invasion by gigantic spiders (*shudder*) and runs to Gandalf with news of goings on at a cursed fortress; our traveling heroes run across several bands of orcs and goblins; Elrond and the Lady Galadriel say they’ve heard rumblings too. And poor Bilbo, well, he gets lost and meets this weird little fella named Gollum.

The movie goes on pretty much keeping faith with the book. Most of the movie will make you smile (or it did us) and I love that they included many of Tolkien’s songs.

The only qualm I have with it, besides that beginning prologue, is the character of Azog, who is only mentioned in the novel, and judging by what my resident Tolkien fan says, is totally unnecessary to the story. As if the group didn’t have enough trouble to get them through the movie. Well, I suppose Jackson had to do something to justify filling up six+ hours. But his part is the only part where the movie drags, in my opinion. On the whole the movie was great/adorable/fan-tastic. 🙂 While the newcomers to The Hobbit cast portrayed their roles wonderfully (I know lots of my Facebook friends seem to have crushes on the dwarves but Richard Armitage’s Thorin looks too much like my dad for me to share that crush for all that he’s incredibly cool as Thorin Oakenshield! ;)), and I love that many from the cast from LOTR returned too (Yea, Galadriel! Cate Blanchett is wonderful, as ever). So yes, it’s well worth the price of the DVD. If you haven’t seen The Hobbit: An Unexpected Adventure, do. It’s available at Amazon.

Why yes, I have watched it several times a week since we purchased it, what do you ask? 😉

One thought on “Movie Monday–The Hobbit”