My current novel is an urban fantasy romance/paranormal romance entitled Keeper of the Grove (Stewards War, book one) . 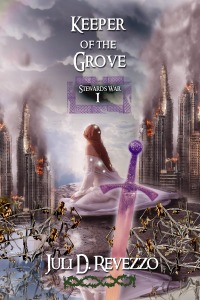 Stacy Macken has one goal in mind: saving her renowned history center from greedy creditors. Losing it would be a catastrophe—one she doesn’t know how she’ll avoid.
Until Aaron Fielding arrives. To all human eyes, he is just like any man, but he reminds Stacy of one of the fae. He certainly enchants her like a fae lover would.
But Stacy suspects there is more to this sexy fellow, with his tales of the Tuatha dé Danann, and magical warriors from Celtic legend who protect humanity from a wicked enemy seeking their destruction. Does his appearance mean the end of the world imminent?

Can she, a studious woman more intent on history books with no training in or love of war, possibly have anything to offer when a long-prophesied druidic battle explodes around her?

It was inspired, believe it or not by a Megadeth song, “Foreclosure of a Dream”. The book went through tons of changes from the time I submitted it, until the day The Wild Rose Press released it last month, minor changes but the core of the story still remained. If you love paranormal romance, and Celtic Mythology, I hope you’ll like it.  It’s available at Amazon only, right now in Kindle Prime (where you can purchase or borrow it if you have a Prime Membership).

Druid Warrior Prince is book one.

Gwenevieve Macken’s well-ordered world falls into chaos as encroaching interlopers scheme to possess both her and her land. Although she’s been trained to spot the signs of inhuman evil in men, the amassing armies take on guises she never expected.

When a foreign guardian presents himself as her only option for salvation, Gwenevieve must make a choice between her desires, and fulfilling the mythic fate to which she was born. A forced marriage to a Tuatha dé Danann warrior isn’t part of her plan.

And DRUID WARRIOR’S HEART, book two in the Celtic Stewards Chronicles, involving one of Stacy’s ancestors. 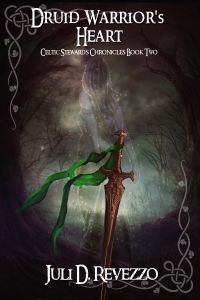 As the latest in her family’s long line of Stewards, Ruth Macken awaits the arrival of a warrior sworn to the Tuatha dé Danaan, the Celtic gods her family has served since the beginning of time. For on that day, a magical battle will erupt. A war between druids and an evil that will decide the fate of mankind.

Isaac Connel knows the battle is imminent, and is ready to fight, once again but from the moment he sees Ruth flitting around the sacred ground, he’s captivated by her fiery charms and a need to protect her.

Despite Isaac’s assurances and the dreams that guide her, what can Ruth and her lover do to drive off this evil? Despite everything, will the world end at the hands of an evil god?

That’s been kind of interesting since there’s a lot of research involved in getting the setting and time period just right.